Who was Gunther Toody? 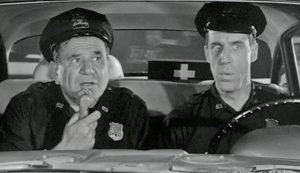 Gunther Toody’s was named after one of the two hilarious police officers in the short-lived but ever-popular TV sitcom “Car 54 Where Are You”. Played by Joe E. Ross, Toody was a somewhat dim-witted but amiable officer known for exclaiming “oooh oooh” at least once in every episode. His partner Francis Muldoon played by Fred Gwynne, most famous for his role as Herman Munster in the 1960’s sitcom “The Munsters”, was the more intelligent and shy one of the two.

Together they had many misadventures in their patrol car – Car 54 – out of the fictional 53rd precinct in the Bronx. This hilarious pair fought crime in the streets of New York and invariably muffed things up. Despite their mishaps, it is hard not to love them and their antics because their hearts were always in the right place.

The show only ran for two years but managed to win an Emmy and has been spoofed and re-made into a movie. Toody and Muldoon will always be near and dear to our hearts and to all those whose eyes were glued to our black and white televisions to watch their side-splitting shenanigans.